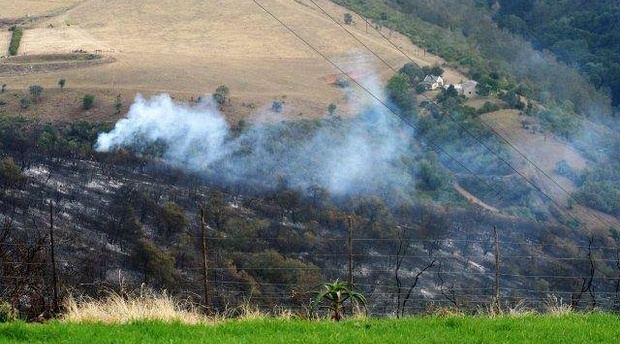 The past week has been one long, long, long firefighting one. The biggest fire ever in this area for over 20 years apparently... thousands of hectares burnt, and still burning.

Thankfully, so far, Blommekloof is still relatively safe, and I only say that because the fire in the kloof has yet to be contained and it creeps closer every night when the choppers can't water bomb, and the winds pick up. I woke in the early hours of this morning hardly able to breath, and come sunrise could not see more than a few meters due to the smoke just hanging....... so one does not know how close the fire really is - though its smell is acrid and strong, and this am i could not hear it "crackling" as I could before. Claude and others were able to stop it 2 nights ago about 500m from us...... but the next wave comes driven by strong winds and just jumps the roads and firebreaks.

The drought has left everywhere tinder dry and at night you watch the trees literally explode like fireworks! I can hear the spotter plane now flying over to see where to direct the chopper for todays work! The firefighters are dead tired but cheery and dedicated, and it is only because of them that we get any shut eye at all.

It was a horrid long weekend of relocating and evacuating guests on top of worrying about the dogs, cat, sheep, cows and other peoples horses that were evacuated to here, but the generosity of other farmers, whom we don't even know, and the kindness of strangers always seems to shine at times like these, and everything gets sorted and settled. & In this valley alone we have lost about 3 or 4 homes that I know of, a couple of barns and outbuildings - but there is much much more to it, the cost of fencing, loss of grazing, and general devastation, it must run into millions and millions. Here are a few random pics I took whilst going to check on my friend June, who was surrounded by fire at one time from every direction, and whose home, like many was saved by the brave firefighters who stood their ground and saved the homes.

Lets hope that it is brought under control or peters out as it back-burns against itself in the next few days, and out of this will come rebirth, regrowth and a whole lot of unexpected beauty...... plus the reminder of the awesome people who pulled together and helped and just got in there and did it! You won't know them but people like Pam + Sally, Henry Meyer, Craig and his daughter, and many many others, coordinating, mustering teams, passing on vital info and holding the whole WhatsApp group together and informed. We could not have done it without you!

Tweets by @blommekloof
Free WiFi in our cottages!

Free WiFi means you can work from paradise - or keep in touch with the world - when you stay at Blommekloof Country Cottages!